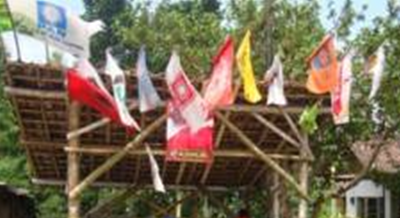 AlimMustofa.com - The Karang Taruna youth organization in Tlogosari Village in Malang City, East Java could be a good model for the promotion of peaceful campaigning. They believe that political competition is healthy but that good neighborhood relation is more important.

It is difficult to find any campaign banners in the village of Tlogosari. This is rare in Indonesia, where streets all over the country are currently filled with posters, flags, and banners of political parties.

There is a reason for this. According to the Chief of Karang Taruna in Tlogosari, Isa Ansori (28), in February tensions rose in town. A supporter of a political party raised party flags right in front of the houses of residents, without their permission. Spontaneously,  a supporter of another political party raised his flags on the other houses in the village. "Then the previous supporter got angry, and took down the flags of his opponent," says Isa. Since then they are contesting each other's  right to raise flags.


To avoid the conflict from escalating, Karang Taruna decided to intervene. They proposed to the parties to put up their flags in just one place in the village. Resident Achmad Puswito (30) who, together with Mr. Ansori, persuaded the youth to collect the flags of the 35 political parties participating in the elections in Malang, and put them in a public area, explains: "I don't want political diversity to break up our neighborhood. Maintaining good relationships between residents is more important."  So far there are 19 political parties who cooperate with the initiative of Karang Taruna to promote peaceful campaigning. (Alim Mustofa, Malang)