On The Campaign Trail In Malang | Alim Mustofa -->

On The Campaign Trail In Malang 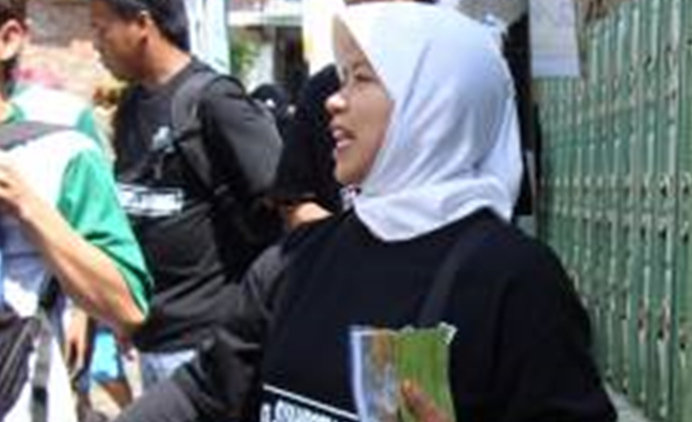 AlimMustofa.com - Election campaigns are not always about mobilizing people in rallies and speaking on stage. Syahrotsa Rahmania, a candidate for the National Awakening Party (PKB) in Malang, East Java,  and alumni of the NIMD supported Democracy School, has her own way of campaigning.
Bath Soap

Rosania, as she calls herself, uses a typical way to introduce herself to the people in Jodipan. She walks around the village with brochures that contain her missions and visions if she is elected in the upcoming elections. In her campaign, Rosania also brings bath soap to her audiences. For Rosania, bath soap is a symbol that she is a clean and accountable politician.

We can't deny that there are many legislative candidates who spend a lot of money and who make promises to their constituencies. “It’s not healthy", says Rosania, "and the cost of democracy is too high. Only the richest candidates can win,” she says.

In a recent ruling, the Constitutional Court has decided that the candidates on the lists of political parties are elected on the highest number of votes received rather than their ranking on the list. This has sparked competition among candidates of the same party.

That is why Rosania is out on the streets, presenting herself to voters.  For her, this is also a fair and democratic way of campaigning because the voters and the candidates can meet each other directly. People can express what they feel to the candidates if they are elected. A local resident of Jodipan, Siyami (52) is very happy to have a chance to talk face to face with the candidate. “It shows that she cares about us,” says Siyami.


A legislative candidate from the Indonesian Unity Party (PSI) Malang, Pandriono is also out on the streets to introduce himself to the potential voters. For Pandriono – who is also democracy school alumni – it is very practical and straightforward to do it that way. According to him "all that voters need to know now is what kind of person the candidate is". That is why Pandriono does not so much try to convince people to vote for his party but rather to present himself as a candidate.(Any Rufaidah and Alim Mustofa, Malang)